Kicker was found dumped on a country road near Crowley, LA. He was in terrible shape. During his time under the care of DFW Pug Rescue, he has been treated for multiple skin issues, including Saracoptic Mange, ear infections, heartworms and intestinal parasite issues. He had an eye removed that was too damaged to save. During this season of Miracles, we celebrate the spirit of rescue, recovery and foster care that is supporting Kicker on his journey to a second chance in life. Below is the first-hand account from our Louisiana volunteers, Fred & Linda Barbaro, that began Kicker’s journey in July 2016:

The Journey of Kicker – a rescued Pug determined to beat the odds and get a second chance at life.

We are estimating him at 2 yrs. old.  He was found on a country road in Crowley, Louisiana.  A couple took him in and when it became apparent to them that he needed veterinarian care which they could not afford, they took him in to the local animal shelter on Saturday, July 23rd.  The shelter volunteer asked them if they could keep him until Monday while she worked the phones to get a rescue to take him.  They said yes.  Meanwhile, the animal shelter contacted Linda Barbaro, an active dog rescuer and DFW Pug Rescue Club volunteer, in Lafayette, Louisiana to see if she could take him or knew a rescue that would.  She contacted the DFW Pug Rescue intake hotline and they immediately said yes. The shelter forwarded us the contact info which was wrong. Took 24 hours to get that corrected and make contact.  It was arranged for Fred Barbaro to go pick up Kicker in Crowley, LA on Sunday, July 24, 2016.  The lady cried at having to part with him but realized he was very much in need of medical help.

DFW Pug Rescue is grateful for all our volunteers, near and far, who have worked together to give Kicker a second chance and prepare him for adoption. You can see the progress he is making in the pictures below. 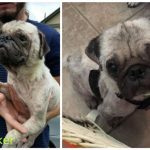 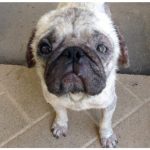 After 24-hours of care and love 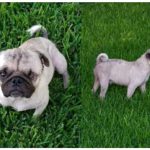 DFW Pug Rescue Club will pay for all of Kicker’s veterinary and medication bills while he continues his recovery in foster care. The cost of preparing him for his forever home is approaching $3,000.

Your support and contributions to DFW Pug Rescue throughout the year have made it possible to give rescued Pugs like Kicker the opportunity at a second chance.

During this holiday season of giving and miracles, we thank you for your support and maintain our promise to Kicker and Pugs everywhere: No Pug Left Behind!

We are an all-volunteer non-profit organization that rescues ALL PUREBRED pugs regardless of age or medical condition.